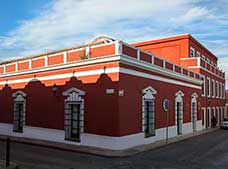 Our team is at your service to help you with your booking issues or answer any related questions.
Mon-Fry (6am-1am), Sat (6am-12am), Sun (6am-9pm) Mision Grand San Cristobal de Las Casas is located in an enormous colonial building originally built in the 18th century, and remodeled at the beginning of the 20th century. Inside the hotel you'll find the original colonial style, while the neo-classical facade bears the mark of the later remodeling.

Originally, this stately building had 16 rooms located around two central courtyards and a stable. The courtyard, corridors and some of the rooms remain today, making Mision Grand San Cristobal de Las Casas a magical place to enjoy an unforgettable vacation in San Cristobal de las Casas.

Location of the Hotel

Francisco I. Madero No.19

Grand Preferential Room
1 King size bed
These rooms are ideal for resting and relaxing after a busy day. Featuring a desk and wireless Internet access, they are also great for working, allowing them to cater to business travelers and vacationers.
$2,257
$1,286
Room Only